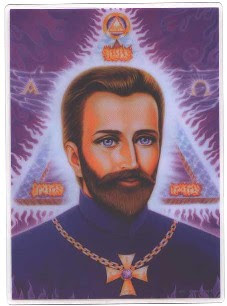 
“I AM St. Germain, and I thank you for inviting me to this gathering. It has been tradition for this family that I speak in celebration of that which you call the Fourth of July. And so, once again, because it is tradition, I encourage you to come with me to that time not so very long ago wherein began the history/herstory of the United States of America, as a free country, but more than a free country, as a symbol to the world, the light of Freedom, as a place where Lady Liberty was invited to be, to inspire all of the citizens.


“Now we know that history/herstory tells you that not all has been sunny and bright in this land of America. But we will tell you truth, the ideals upon which it is founded, are real and multi-dimensional, if you will. So relax and be comfortable. We are going to go on a short journey, and then we shall continue. Now this is the story that I have told before and I come with before you again. If you have heard it, enjoy the re-living of it. If you have not heard it, enjoy, enjoy it for the first time in your consciousness, but you all know it. Lemurians united. And the spirit of Lemuria was just as much there as it is now.


“And so I, St. Germain, have had many identities on Planet Earth, and they have all been with purpose, some known, many not known. I have been successful in alchemy. I have been successful in many areas of what you might call the magical abilities. I am known by my St. Germain name as a banker, and I can assure you that I saw the need for the world to be free from the constraints that the bankers were starting to put upon it. Imagine – I, St. Germain, gave the world what you call Compound Interest, so that people could save a bit here and a bit there and have it grow. Well you all know how that’s been used in modern times, do you not? A bit of a misuse, but it is about to be corrected.


“So we go back to that time wherein this country was envisioned and the vision was presented that this group of colonies with different people from different places, and yes they did have their differences, unite under a single banner to become a country instead of colonies. To become free and independent of the Crown of England. Now that was the inspiration. That was the concept that was presented, and no matter what you may have heard, that concept is alive and well and it is because Light Beings such as yourselves have kept it ever alive. And so it is that we honor the principles upon which this and other countries have been founded. And that is why we requested the music that we have requested for this day of celebration. What are we celebrating?


“Well now, let’s journey back. It was rather hot that summer. And there was a meeting of representatives from all over the colonies that came together to consider what the best option was. The laws that King George was insisting upon passing were intolerable, the taxations just kept increasing more and more. Some of the citizens were actually being kidnapped to serve in the armies and the navy of King George, even though they had their homes in these colonies. And so there were some uprisings, some incidents where there were protests going on. There was no real unity. There was no real game plan, if you will, for what to do. And so this group met. And I, and the others who were there in spirit, co-created with them a document. A most precious document. It was called the’Declaration of Independence.’


“After it was penned, courage faded with exhaustion, and what you call reality began to set in, and they began to see what consequences there could be if they signed this document. They had pledged their lives, their fortunes and their sacred honor. They really didn’t want to give it all up. They had some very human moments in that great hall. So, of course, I made my appearance. I strode into that hall. I banged the door shut. And I spoke. And what I said to them was this: ‘You have a mission here. Your mission is to give birth to a country where the principles are Freedom and honor and respect for each other and coming together in oneness of spirit, and where opportunity will be open to all. This is the country and these is the principles upon which it is to be founded. You will sign this document before you leave here. It is your mission, it is holy, it is sacred, and this is your moment to give this to the world.’


“Well, the spirits rose, the consciousness rose, the hearts opened and the love and the dedication to this purpose showed forth in that room. You may know the one who came forth first and he said, ‘Well, if I am going to sign it for the entire world then make no mistake that it’s me, and this is my signature.’ And so John Hancock came forward.


“And the others stood, one by one, and came. And after they had signed and passed by the table upon which the document sat, I and Lady Liberty were there to congratulate them. And they felt it. And their spirits rose even higher. And this was truly a sacred moment. Without this moment, all that followed would not have flowed in the manner it did. And so remember this moment; bring yourselves back to that great hall on that summer’s day. Be there. And if you choose, step right up and sign that document. You were all there in spirit. And there is more than one of you in this family audience who were there in body.


“You did it. Congratulations, Beloved Ones! Be joyful. It is most important that you be so. Now look upon the Christ Consciousness aspect of this event, and know that even though there may have been some dark moments, some shadows of oppression, some lies that have been told, it’s all now bathing in the light. And that all participants throughout all of the time that they have spent in this country, or in others, who took up the banner of Freedom for all, who gave some kind of acknowledgement and honoring to the principles and foundations, know that all of us are with you in this celebration of this occasion. And that you are all celebrated for your contributions, then, before then and now, as you measure time. So let the courage fill your beings.


“And we ask that you say an acknowledgement and a commitment to this Freedom, which you are helping to anchor, in truth, not just in the country of the United States of America, but for the entire planet. And let this country shine forth. It has been destined that this country would lead the way into the Golden Age, into the homecoming to Lemuria. Let the principles upon which it stands, let the beauty of it, let the joy, the sparkle of it shine forth now in your hearts. I stand here with Lady Liberty and this entire company of guides and mentors and representatives to you, your guides and you, Beloved Ones, and you. And let us say together, I will say some words and I ask that you repeat after me if you are so inclined, to commit once again to be the lights of freedom upon this land and the world. Let us begin:

“I AM the Light

And I say unto the world

And let your hearts soar with joy

Hear the music from the heavens

As One with us All

Cast off your doubts

You say unto the world

Be the messengers, I AM

Tell others they have mission and purpose, I do

For I accept this all

as my mission and purpose

And I spread the word

of the Freedom We Are

of my loving mission and purpose

In this moment and all to come

And I close my words

With the energies of Love

The All that we Are

Of the Joy
Of the Freedom

We express and live.

We join with you

And so it is we empower

These announcements of Freedom

Because We Are the Announcements

And all will flow

Oneness of the timeline

“And so it is, Beloved Ones, that we have just created a new timeline. For the actualization, the manifestation, the creation of all, because We are the Ones we have been waiting for. And we have greeted ourselves, and the entire planet and the universe beyond from that oneness, from that joy. We have opened new doors of Freedom. The bells of Freedom indeed are chiming throughout the heavens, and they chime for us. And so it is that we come together in oneness of purpose, in solidarity of mission and in absolute and complete joy to the world.


“Thank you, most Beloved Ones, for taking this journey, this return to home, this acknowledgement of our mission and purpose and the joy we are. And so it is. I, St. Germain, thank you and greet you. Namaste!”

Given through Susan Leland, July 6, 2010. www.AshtarontheRoad.com © Ashtar on the Road Publications 2010. All rights reserved; however, this is a gift to all of us and it may be distributed freely on condition that all accreditation is acknowledged and that no part is altered or deleted.
Posted by luisa vasconcellos at 7:00 AM