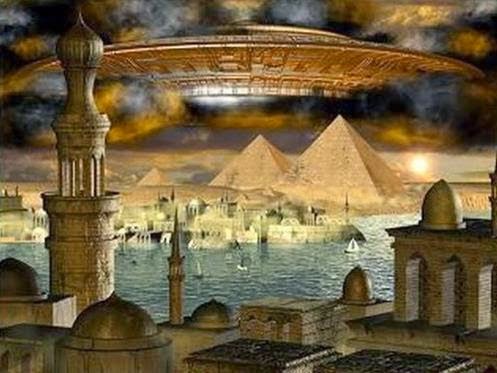 It was confirmed to me this morning some news that I had been waiting to receive since several decades ago, and I would like to share them with you.

It refers to the pollution that is generated by agents such as car exhausts, factory chimneys, airplane turbines, or vessels' fuel and oil waste at sea.
Perhaps you have not been aware of how polluted your planet is at present; but we, who have known this for some time, were really alarmed by the increase in gases in your atmosphere, which has as a result a greenhouse effect, an increase in climate temperatures, and the gradual melting of the glacier regions.

We have been working very hard to counter the effects of said air pollution, and you have no idea about the effort and determination our fleets and their crews have invested in the aforementioned task.

There are no words to describe all they have done to solve the damages that many of your governments allow to take place, without doing anything to remedy them, knowing what this exacerbated increase in the earth's pollution implies.

From our spaceships, the motherships as well as the smaller ones, we are conducting a comprehensive monitoring of pollution level fluctuations within your habitat, to study their effects and the damages caused on human, animal and plant populations.

It is not surprising that on occasion you observe sightings of these small and medium-sized crafts carrying out their tasks of experimentation, extraction, classification, recovery, and clean-up of many areas of your planet that are suffering the assault of equipment, power plants, factories, nuclear plants, etc., created by man himself.

Not only we, your Gallacic brethren, but also a great variety of beings of a different nature are helping you to counter the damaging effects of their negligent actions, such as the beings from inner Earth who live within the Earth's crust, the Devas and the Elementals of the earth, the water, the fire and the air, and benevolent Entities of pure Light who graciously offer themselves from the heart for this recovery and transmutation job.

As I was mentioning in the first paragraph of today's message, I was informed this morning by crew members of my Alpha Spaceship that in the depths of the Pacific and Atlantic Oceans certain utensils placed there by civilizations prior to yours of this same planet have been found.

Our scientists have begun studying said utensils, and you will be informed shortly about the benefits that the implementation of said devices will have for all living beings of the planet.

The structure and functioning of said utensils is not complex for the high-level knowledge our scientists have; but they say that these device's morphology is somewhat strange and they are asking for some time to get to know well how they operate and to adapt them for the clean-up and decontamination needs of your seas and oceans, and above all, your air.

In later communications you will be informed of the advances of our technicians on this respect, and we will keep you up to date.

Try, brothers and sisters, at least those of you reading this message, to be more careful with your environment; recycle the raw materials that you have used and that can be used again, and try to pollute as little as possible your land and marine habitat.

We will be in communication with you soon.
Peace and Love

Translated into English by Gloria
Posted by MICAS at 1:55 AM